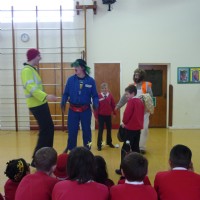 Today the Young Shakespeare Company visited the school to re-enact A Midsummer Night's Dream with the help of Year 6!

Year six had lots of fun today at the Shakespeare workshop. A group of actors came to the school and we helped them to perform a play called a Midsummer Night's Dream which had lots of interesting and unusual characters! The play is a comedy set in Ancient Greece and tells the story of some young couples, a troop of actors, some mischievous fairies and a man who is transformed into a half donkey! We were able to join in and some people were asked to take on the roles of the main characters. It was very funny watching them